Over the last few months Transforma Insights has been building a database analysing real world deployments of IoT, AI and other digital transformation technologies. The aim is to feed back meaningful analysis to the market about best practice. Our first analysis is focused on IoT, based on assessment of hundreds of deployments.

The key headlines from the first analysis were as follows: 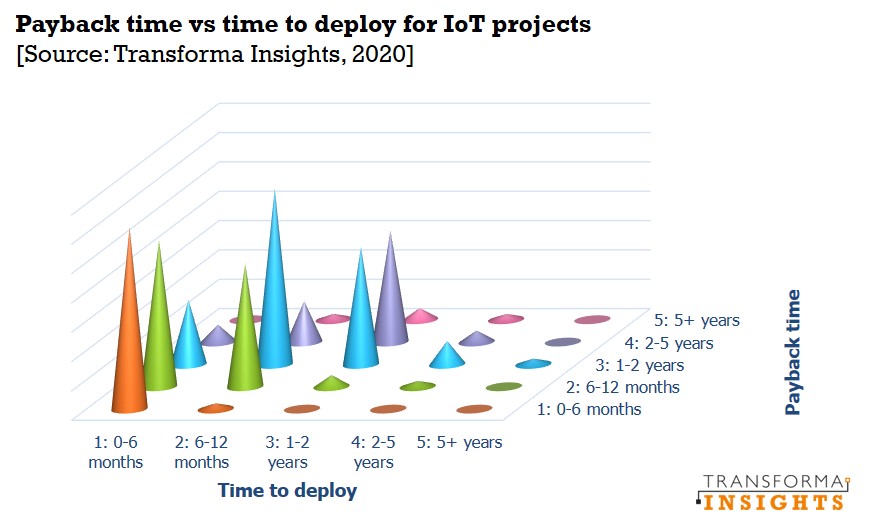 What's interesting is that these aren't short-term projects. Almost 70% are expected to last over 5 years, with 20% going beyond 10 years. There is an acceptance that IoT will be deployed for the long-term, but not that it might take a while for the ROI to materialise.

The vast majority of IoT projects have a significant impact only on internal process efficiency. Almost 70% of projects had a significant or transformational effect on process efficiency (i.e. internal organisational processes), but the equivalent impact on value proposition (i.e. changing the organisations' offering) was below 25% and barely 5% could be described as disruptive to the industry as a whole. 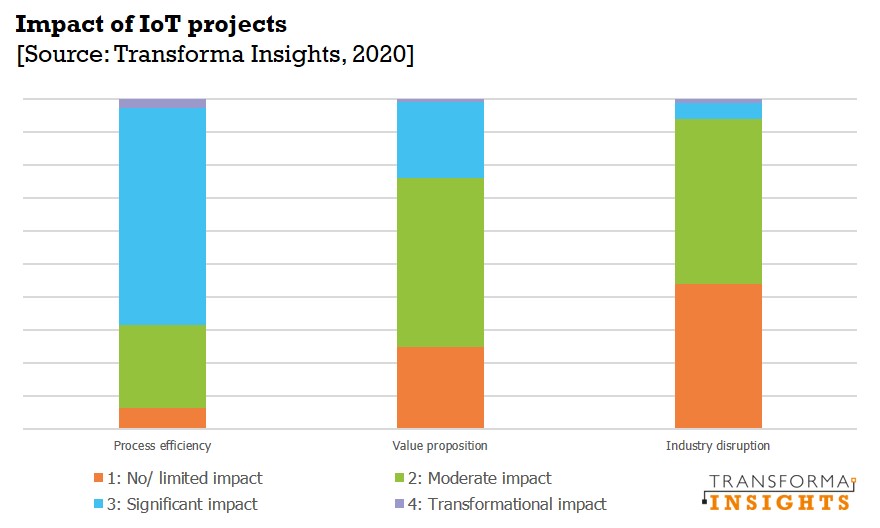 Both of these statistics suggest that companies deploying IoT are playing it safe, even now. Deployments are characterised by fast deployment, fast ROI and a focus on internal business processes rather than anything more transformational or disruptive.

Another data point is telling. We also looked at the level of operational risk associated with the solution, including the potential to disrupt operations and the criticality of potential disruptions. Our findings were that not only do less than 5% of organisations engage in IoT projects above a 'medium' risk, but over 40% of projects are actually aimed at de-risking, i.e. they are solutions that don’t generally change enterprise operations, but result in the same functions being performed at a lower level of risk, usually due to the availability of better information.

Taken together these observations suggest that the IoT overall is still only in the early stages of development. They also suggest a level of organisational inertia that will need to be overcome before the true potential of IoT can be realised.

The data illustrated in this blog post is drawn from Transforma Insights' Best Practice & Vendor Selection Database, which assesses IoT and other digital transformation deployments based on analysis of over 200 deployment characteristics. Our expert team of analysts gathers case studies and evaluates them, identifying the key deployment parameters, such as geography, deployment time, key vendors, and dozens of other metrics concering the technical and commercial parameters of the deployment.

Enterprise adopters can use the information to understand best practices in their industry, prioritise projects, select the appropriate technologies and identify the most appropriate vendors. Vendors can use it to understand the competitive landscape and identify which applications and verticals might represent the strongest opportunity for their products, services and solutions.

The Best Practice & Vendor Selection Database will be launched soon as part of the Transforma Insights Advisory Service. You can register to receive further updates by signing up to our mailing list here (select the 'Connect' option). If you would like to know more about our work, please contact us via email.

To hear more of the results see Matt Hatton present at Smart IoT London on Thursday 12th March on the subject of 'Learning the lessons of effective IoT implementations'. See events listings for more details.