The topic of mobile private networks (MPNs) has been high on the technology agenda during 2020. In particular, it is seen as one of the most immediate opportunities associated with 5G, although 4G MPNs have already been deployed in manufacturing, transportation, energy and many other sectors. The last twelve months has also seen an increasing availability of spectrum that will be useful for MPNs.

Why is demand for MPN rising?

Transforma Insights today published a series of reports looking at the opportunity associated with MPNs. The first, 'Mobile Private Networks for IoT: 5G capabilities and new dedicated spectrum will drive demand', looks at the reasons why demand for MPNs is rising. These include factors such as the benefits compared to using other alternative technologies, most prominently improvements in reliability and security, the increasing focus from mobile network operators and telecommunications infrastructure vendors, and the recent spectrum allocations, most notably the CBRS auctions in the US, which have created a stimulus to adoption.

There is a global addressable market for around 42,000 Mobile Private Networks for IoT (excluding agriculture), as discussed in the second report ‘Mobile Private Networks for IoT: Which sectors will see the biggest adoption?' and by 2030 Transforma Insights estimates that there will be 150 million cellular IoT devices connected to private networks. The chart below shows Transforma Insights view on which verticals might have the biggest addressable market. 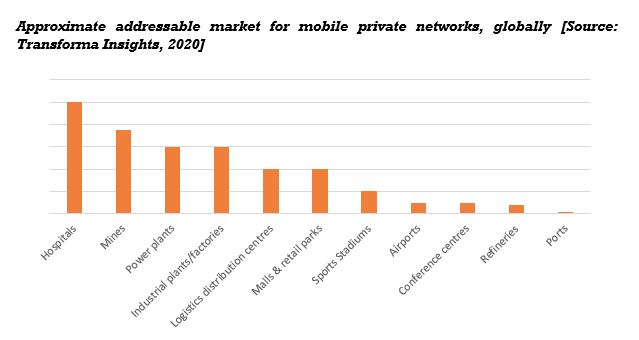 A global market for MPN

One of the main conclusions of the reports is that the maximization of the value delivered by MPNs is dependent on the emergence of a global market. Today there is a lot of variation between countries, particularly in respect of where spectrum is available, and who might hold it. This means that the MPN market is inhibited and more localized than might be optimum. A global market for MPNs will allow for more specialization amongst service providers, for instance focused on specific verticals. More specialization will lead to more innovation in services offered.

Over time we expect MPN adoption to grow relatively rapidly, and to see more homogeneity in the deployment environment, e.g. with more countries making dedicated private spectrum available. This almost inevitably goes hand-in-hand with growing productization of offerings, while at the same time the contract size will decline. These factors are closely linked, with average price being a key determinant of adoption, and productization being required to reduce price. At the same time, and perhaps counter-intuitively, we also expect that there will be increasing requirements for value-add on top of the pure network offering. 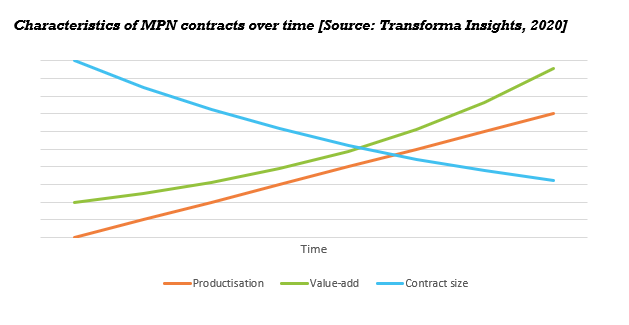 The verticals in which MPNs are adopted have very different requirements, particularly for IoT. What a port needs is very different from a factory, mall or hospital. This means that once the market becomes big enough, ideally globalised, the market will start to fracture, with vendors inevitably layering on vertical-specific capabilities as a way to differentiate.

Who will win in MPN?

The final report in the series, ‘Mobile Private Networks for IoT: Who will be the winners?’ examines all of the various participants in providing MPNs and how their internal dynamics and interrelationships are likely to evolve in the next 5-10 years. It proposes Transforma Insights’ view on who will be the likely winners in terms of realizing the benefit from the market.

Ultimately pure-play Mobile Private Networks as a stand-alone market will not last. The offerings are very useful but they will ultimately need to be subsumed into one of several bigger portfolios of offerings. MNOs will sell MPNs as part of a wider suite of enterprise services, enterprise infrastructure vendors can integrate them quite neatly into a wider networking portfolio, systems integrators will harness them for customized projects covering a broader range of functionality, and an emerging set of specialist service providers will do a similar thing for more vertically-focused productized offerings. Telecoms infrastructure vendors will need to find a way to add additional value to their vanilla MPN offerings.