This week Sierra Wireless announced that it was acquiring Australian MVNO M2M Group. No particular surprises there as Sierra has been pretty acquisitive in recent years, particularly of resellers/MVNOs, including Numerex and Maingate. The most eye-catching thing was the price. There’s a bit of nuance to it since there was obviously some cash in the company and some obligations, but the price paid was approximately one times revenue.

Revenue multiple is a crude benchmark for any organisation’s valuation. It ignores intellectual property, debt, underlying strong or weak management, and demand-side drivers around how desperate the buyer might be for the assets, and many other things besides. However, it does point to a trend.

In the chart below we have benchmarked some relatively recent acquisitions in the IoT world based on purchase price as a multiple of annual revenue, as closely as we can reckon all those figures. 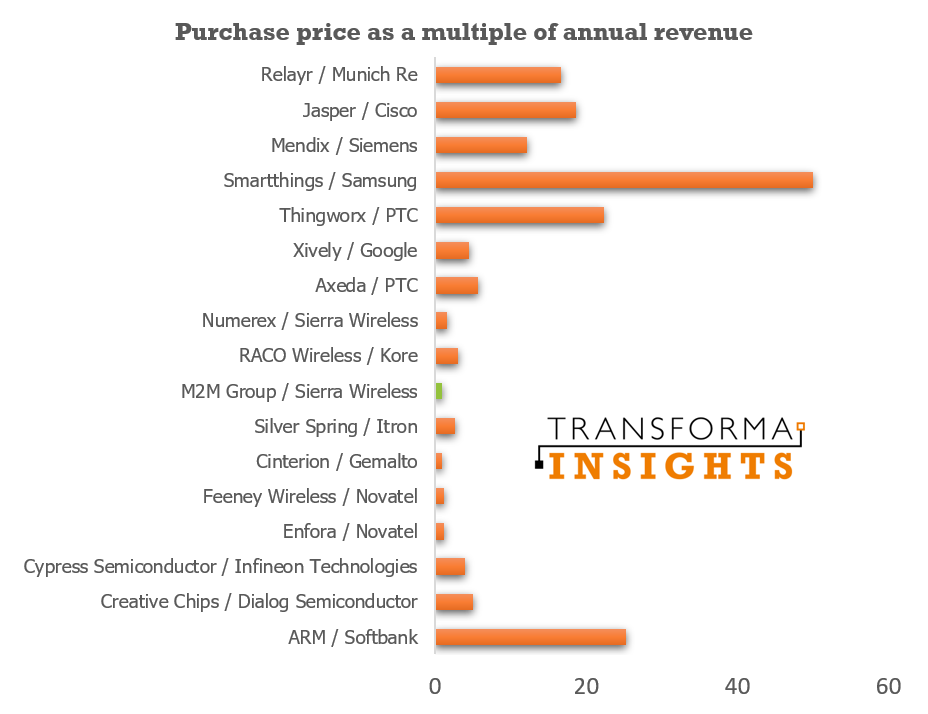 One major trend leaps out: hardware (except those making semiconductors) and connectivity companies are valued a lot less than software companies. In a future blog I will explore how actually this is partially misleading and illustrates survivorship bias.

For now, the main issue to consider is the extent to which this demonstrates how commoditised the connectivity space has become. When Sierra Wireless bought Numerex in 2017 the multiple on revenue was approximately 1.5x. Numerex had quite a few problems, and a betting man would have said that was probably a low water mark for this particular part of the value chain sector. In comparison, when Kore Wireless acquired Raco in 2015 the comparable figure was around 3x revenue.

It's hard to escape the view that connectivity has become a commoditised space, with little opportunity for differentiation and rapidly declining margins. A raft of new low cost competitors have come into the market in recent years, including Sigfox and 1nce, which has driven prices down in some markets, but this is a much broader trend. As mobile network operators chase an IoT opportunity that is the one area of growth while most other lines of business are flat, prices fall. There is also a technology generation issue. While traditional resellers were strong in mature 2G technologies, the switching off of 2G and 3G and the firing up of new 5G networks, which are more designed for IoT, threaten their viability.

So what? Well it means that the connectivity cost will be a diminishingly small part of the cost of deploying an IoT solution, which clearly bodes well for greater growth. It also probably means that the MNOs will increasingly subsume the MVNOs because there will be insufficient margin available to support both. Finally, there are likely to be some cheap assets available. Over the last few years analysts have often obsessed about ‘moving up the value chain’ with providers of commoditised services looking to expand into higher value elements. What looks likely to happen is actually the reverse, with those further up the value chain moving down. Google, Amazon, Facebook and AWS have all experimented to greater or lesser degrees with running their own networks recently. If prices continue to fall we expect they will pick up some assets.