Transforma Insights’ highly granular IoT forecasts demonstrate fascinating changes to the landscape for cellular connectivity over the next 10 years, including 5G growth and the end of 2G and 3G.

Transforma Insights recently released its forecast for the different connectivity technologies for the Internet of Things (IoT). One element relates to wide area cellular technologies (i.e. 3GPP generations 2G through 5G). According to the Connected Devices Forecast the total number of cellular connected IoT devices will grow from one billion at the end of 2019 to 5.4 billion at the end of 2030. 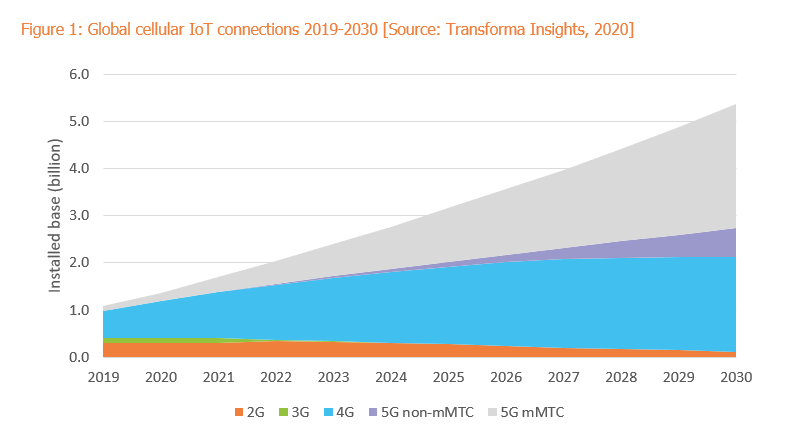 A large part of the market growth will be attributable to the increasing number of devices connected using Low Power Wide Area (LPWA) network technologies LTE-M and NB-IoT, which are now grouped under the umbrella term ‘5G massive Machine-Type Communications’ (5G mMTC). These technologies were examined in a press release published last week: ‘Low Power Wide Area (LPWA) IoT connections to grow to 4 billion in 2030’.

The number of 5G devices will total 3.3 billion at the end of 2030, up from just 100 million at the end of 2019. It should be stressed that this figure will be dominated by the mMTC technologies (NB-IoT and LTE-M) which have recently been folded into 5G. They account for over 80% of all 5G connections. Commenting on the findings, Founding Partner Matt Hatton said: “This is not an overwhelming rush for high bandwidth, low latency connections. This growth in 5G is predominantly a reflection of the re-categorisation of these mMTC technologies, and their successors, as 5G.”

Excluding the mMTC technologies the forecast shows a total of 2.7 billion connections at the end of 2030 of which 621 million (23%) will be ‘full’ 5G IoT connections. The lion’s share will be 4G/LTE, accounting for 73% of the total base. The remainder use 2G which historically accounted for the vast majority of cellular IoT connections.

Looking to annual shipments gives a further perspective on the change in generations. Of the 371 million non-mMTC cellular devices that Transforma Insights expects to ship in 2030, 170 million (46%) will be 5G. The remaining 201 million will be 4G/LTE. It is noteworthy that the total shipments of cellular (non-mMTC) devices hovers around 300 million per year for the duration of the forecasts. The lion’s share of the increase in shipments of cellular connected devices from today’s baseline will be accounted for by the new mMTC technologies which can together more than replicate the capabilities of the old 2G networks, at lower prices and with much longer battery life. 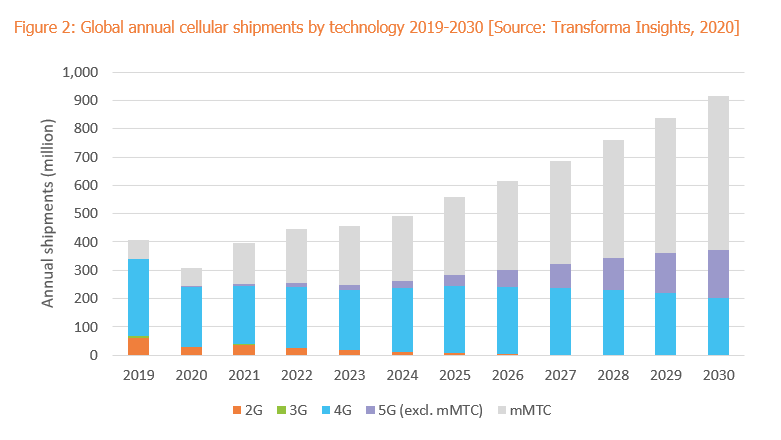 It is also notable that shipments of devices where 2G or 3G are the highest embedded technology will have stopped by 2028. Principal Analyst Matt Arnott comments: “We have seen a lot of different approaches to 2G and 3G switch off, which will continue into the next decade. This promises few guarantees of availability for either technology, which will be reflected in shipments. Ultimately, 2G and 3G’s days are numbered. While some devices will continue to ship with 2G, and perhaps 3G, included, they will be as secondary supporting technologies. Even then the requirement will last only a few further years until LPWA and LTE networks are ubiquitous.”

The single biggest application for 5G (non-mMTC) is in vehicle head units, which accounts for 44% of all such IoT shipments in 2030. Automotive manufacturers are quite keen on 5G, not least as a way of ensuring that the vehicle connectivity is future-proofed. The next biggest is CCTV, accounting for 24%, reflecting a growing demand for high bandwidth connectivity. Commenting on the findings, Matt Hatton explains: “There will be demand for non-mMTC 5G simply because it will be the latest, most future-proof technology and it will provide superior bandwidth. However, very few use cases demonstrate much demand for ultra-low latency communications, or the types of device density that have also been proposed as advantages of 5G.”

Join our webinar to find out more

The forecasts presented here are taken from Transforma Insights’ Total Addressable Market (TAM) Forecast Database. The TAM Forecasts provide our quantitative view of the market opportunity associated with Digital Transformation and all of the associated technologies.

The IoT Connected Things forecasts presented are based on an extensive and highly granular research methodology, which involves analysing over 300 combinations of application and vertical across each of 196 countries.