In a recent report ‘What is the ‘Thin IoT’ stack and why do I need it?’ I wrote about the concept of Thin IoT, a set of technologies which are optimised for deploying in constrained environments. In this blog post I want to summarise those constraints. These constraints consist of what we term the 5 ‘P’s of IoT: power, processing, place, price and proportions, as illustrated in the image below.

Specifically the access to mains power, is a key determinant of how an IoT application is architected. The use of battery power necessitates numerous compromises in terms of connectivity technology used, communications protocols, processing and more. All of those choices have implications for the power usage and require some sort of trade off. According to Transforma Insights’ analysis of real world IoT deployments, over one-quarter of enterprise IoT deployments today are reliant on battery power, and with the increasing prevalence of LPWA technologies, the ability of enterprises to deploy applications where there is no mains power will only increase. By 2030 it’s easily possible that 50% of enterprise IoT deployments will be heavily or exclusively based on battery-powered devices.

This includes all of the semiconductor capabilities on the device including CPU and memory. This is expensive. Moore’s law has obviously helped to reduce that cost, assisted by hardware techniques such as system on a chip (SoC) and chip on board (CoB) which have helped to reduce the cost for the same grade of equipment. The latest development in the field is ARM’s PlasticARM solution. On the software side, a raft of embedded operating systems including Amazon FreeRTOS, RIOT, TinyOS and Zephyr have come available with very small footprints, giving greater capability on processing constrained devices.

Where the device is located is a constraint when it limits access to specific networks (and power) and/or the ability of people to access the device. Geographically remote devices may have very limited options of how to be connected, often being limited to technologies that are low bandwidth or costly, or both. This might create a strong impetus for increasing processing on the device, using machine learning to automate local decision making. This helps to minimise what traffic needs to be sent. This limitation also has strong implications for, for instance, which networking protocols might be used, favouring less chatty ones such as MQTT-SN. Furthermore, being in a remote location can also limit the ability of people to make changes to the device manually (necessitating remote management).

Always going to be consideration and a limitation on what a developer can do with an IoT device. There are almost no applications that are completely price insensitive, meaning there is always an incentive to keep prices low. The link between price reduction and adoption is not linear; a halving of the cost of putting a device into the field, whether that be connectivity or hardware costs, will likely mean much more than double the sales. As an example, disposable devices (which Transforma Insights includes in its TAM Connected Devices IoT Forecasts) might be viable at a high price point for tracking high value assets such as pharmaceuticals or precious metals, but the volumes of those devices will be tiny. Cut the price by 90% and it becomes viable for millions of much lower value assets. Cut it by 99% and the sky’s the limit.

This relates to the dimensions of the device and the inherent limitations that come from that. A monitoring device attached to a piece of industrial equipment can probably be of any size, within reason (although will probably need some consideration of ruggedisation to cope with vibrations, dust, heat and cold). A smart watch, in contrast, has a very strict set of dimensions it needs to keep to. This has implications particularly for trading off against other of the 5 ‘P’s, particularly price: smaller components tend to be more expensive.

All the constraints interact

In truth any given constraint is likely to be a combination of, or involve the interaction of, several of these. For instance, devices that need to rely on low bandwidth networks may need additional capabilities for pre-processing the data on-device. Similarly, with unlimited funds most of the other challenges can be resolved, for instance through very small components or the use of expensive network technologies. All of these need to be traded off when deciding on the best combination of technologies and device specifications to use.

A growing range of tools to address constrained IoT

What is for sure is that there is a constantly growing range of tools available for implementing IoT solutions that cut across all of these constraints. We term these tools the ‘Thin IoT’ stack. It comprises all of the various elements of an IoT solution. Across each of five layers (device hardware, device software, networking, middleware, and edge computing and machine learning) there are optimum technologies including system-on-chip, chip-on-board, embedded operating systems such as TinyOS and RIOT, networking technologies such as MQTT, CoAP, and LPWA technologies, thin middleware, and data processing techniques such as TinyML. 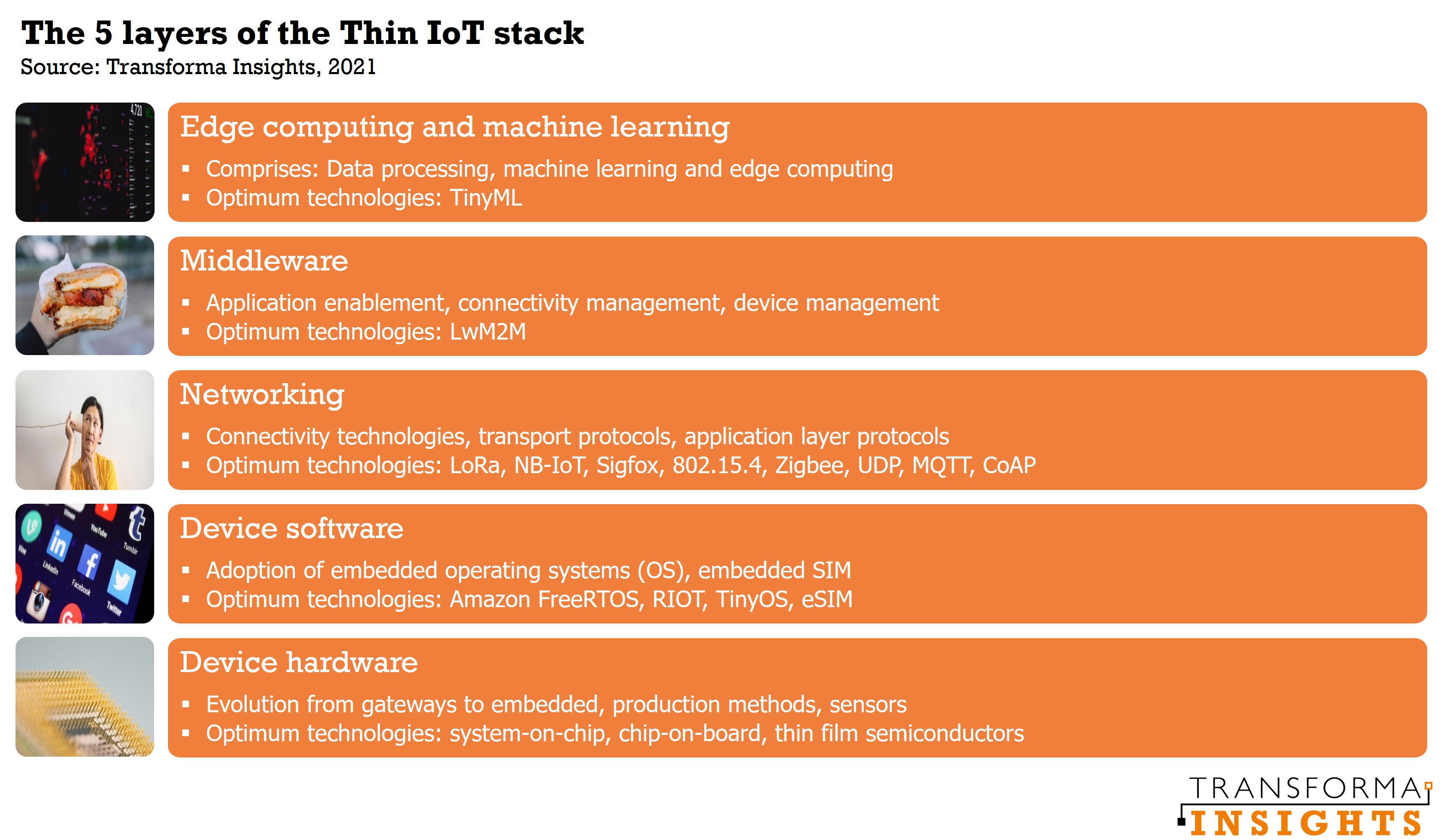 It’s very unlikely that any IoT project will make use of all of these technologies, or even need to give much consideration to all of the layers of the stack. However, their collective availability is certainly stimulating IoT. Transforma Insights estimates that of the 27 billion IoT connections forecast for end 2030, over 90% of connections will make use of some of them.