The impact of COVID-19 on IoT

In a previous blogpost on IoT revenue forecasts, I discussed the short-term impacts of the COVID-19 pandemic that are shown in our Internet of Things (IoT) TAM forecasts. As mentioned in that post, the potential impact of COVID-19 became obvious only halfway through our efforts to create our IoT forecasts. Understandably this prompted some fairly radical changes to how we needed to think about the future of the 169 IoT applications that we forecast. Whilst this required a large rework, it also allows us to compare our views of the IoT market both pre- and post-COVID-19 outbreak. This post will focus on the delta between these two datasets, and a brief overview of some of the long-term consequences of the pandemic. Below is a chart comparing total global IoT revenue across the first six years of our forecast. 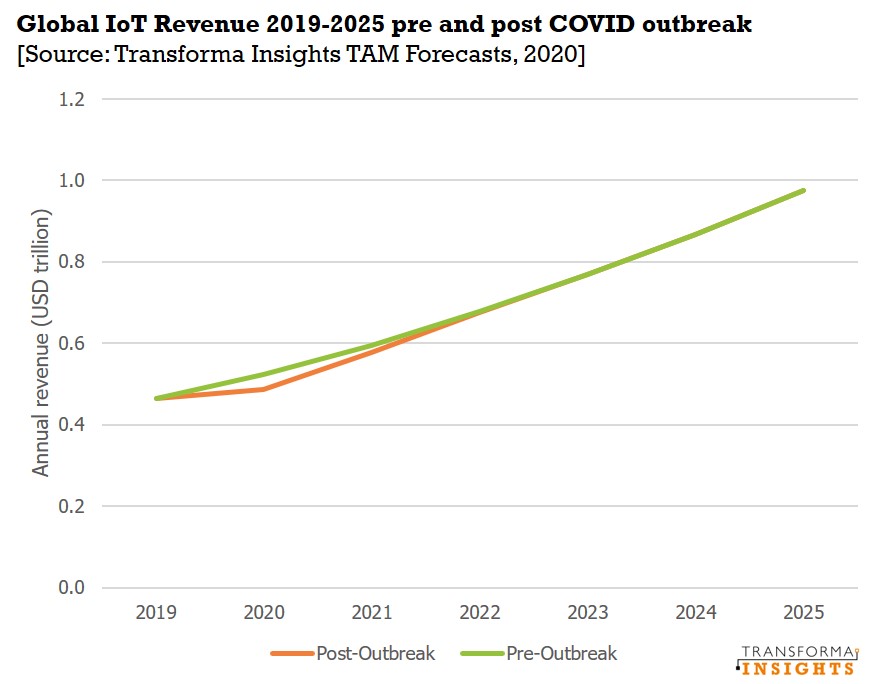 Perhaps the most obvious take away is that despite the tumultuous changes to the world so far in 2020, the drop in total IoT revenue is relatively small in percentage terms. Our pre-outbreak forecast predicted USD524 billion in total IoT revenue for 2020, which we revised downwards by 7% to USD487 billion in our post-outbreak forecast. This figure still represents growth relative to 2019’s USD465 billion, although it’s much more modest than expected previously.

This new total figure for 2020 incorporates USD294 billion in recurring revenue and USD193 billion in hardware revenue. The revision in recurring revenue is relatively minor, from an original figure of USD302 billion, as it’s mostly derived from the existing installed base of IoT devices, which will continue to increase in 2020. Growth will obviously be curtailed as expansion into new sources of revenue will be less viable, but existing revenue streams will be largely unaffected.

We have reduced our expectation for hardware revenue in 2020 from USD222 billion in our pre-outbreak forecast, down to USD193 billion in our post-outbreak iteration. This almost USD30 billion dollar deficit represents the difficulties that businesses focused on non-recurring sources of IoT revenue will suffer throughout 2020. In fact, the 2020 hardware revenue opportunity will be smaller than 2019’s USD205 billion. However, those that can weather the storm of 2020 will be able to take advantage of the deferred demand that manifests during later years of the forecast.

Although 2020 shows by far the most significant difference between the two forecasts, the legacy of the pandemic and the disruption caused by the response to it will continue to affect our forecast throughout its length. The USD37 billion reduction in IoT revenue in 2020 accounts for just over half of the cumulative USD65 billion drop seen over the entire length of our forecast. A chart showing the percentage growth in total IoT revenue throughout our forecast period can be seen below. 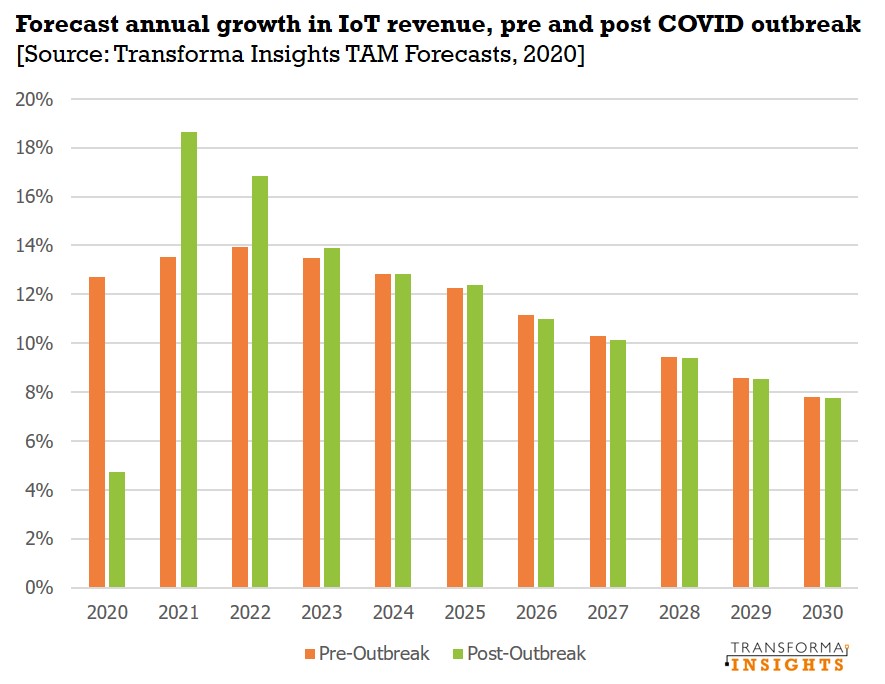 From a growth perspective, the two forecast versions don’t converge until 2024 - after the initial deficit of 2020 and consequent market recovery in 2021-2023. This chart shows clearly the significant fluctuations caused by the pandemic during the early years of the forecast. For a more in-depth exploration of the revenue growth of our 20 different use cases and an overview of the early effects of the COVID-19 pandemic then visit the previous blogpost linked above. The most significant contributing factors behind the early disruption have been the constraints to both supply and demand caused by the response to COVID-19. Lockdown measures introduced in many countries have rendered large amounts of commercial space unused and consequently reduced the spend from many sectors. Supply has been limited by a drop in manufacturing output, supply chain disruption and limits on the number of deployments that have been possible.

We are now almost halfway through the year and questions remain over what the global response to COVID-19 will be within the next quarter, let alone the remainder of 2020 and the decade that follows in our forecast. Early predictions on the extent of the economic impact have been considerably less than positive. Huge levels of unemployment are likely to cause a tightening of household budgets; over 40 million Americans have sought unemployment benefits during the pandemic at the time of writing.

Government responses will vary, some countries will introduce austerity measures, while others will look to invest in public works projects. The EU has recently announced more than USD1 trillion in financial stimulus packages for member states. Similarly, China has announced USD400 billion for local governments to spend on infrastructure. These schemes will no doubt prompt investment in IoT as part of infrastructure projects, both explicitly mention investment in 5G infrastructure, accelerating the adoption of 5G in IoT devices. The stimulus packages also both look to boost environmental health. Undoubtedly some of this investment will make its way to expanding smart grid capabilities, for instance. Further spending is likely to make its way to smart city initiatives as well as transport infrastructure.#

Behavioural changes will also play a significant role in changing IoT investment patterns in the coming years. The first half of 2020 has seen a huge increase in remote working and a vast reduction in travel. Whilst it’s unlikely that video conferencing software will see such a high utilisation rate again in the next decade, those who were hesitant or unsure on their remote working policies are unlikely to remain so once normality resumes. Indeed, a percentage of the population may decide to seek out home working opportunities in future having experienced it for the first time in the past few months. Such a shift would reduce the need for vehicles, both public and private, as well as building automation systems for office space, but would also encourage spending on home office equipment and consumer IoT as workers spend more time in their homes. Those who no longer need to commute may consequently decide that their proximity to urban areas isn’t quite so necessary. This combined with an increased awareness of the public health consequences of spending time in densely populated areas may cause a reversal or deceleration in the trend towards urbanisation. Such a trend would reduce the need for investment in public transport and smart city infrastructure and would encourage investment from network providers outside urban areas. Such trends are speculative at this stage, but we have sought to adapt our forecasts to reflect the potential for such changes.

Exploring the full extent of the impact COVID-19 will have on IoT is understandably far beyond what can reasonably be contained within a blog post. A more detailed discussion on the ideas put forward in this blog, as well as a few more that didn’t quite make the cut, can be found in our Key Topic Insight Report on the subject.