The Internet of Things will dominate Artificial Intelligence

Tweet
region: ALL sector: ALL Artificial IntelligenceInternet of ThingsEdge Computing

New forecasts from Transforma Insights point at an explosion in the use of Artificial Intelligence for improving enterprise processes and critical systems. The devil is, as ever, in the detail, but the headline is that adoption of AI, measured in ‘instances’ is set to grow ten-fold in the next decade.

At Transforma Insights we are currently in the process of pulling together a set of forecasts of the Artificial Intelligence market, and preparing for our webinar on the 16th February. In this blog post we have a peek at the first sets of data coming from the report. We have pulled out a couple of highlights of the research to give a flavour of the granularity of the data, the topics we’ll be looking at in the webinar and the key emerging themes.

The first thing to explain is exactly what we forecast. Our forecasts aren’t like many other AI forecasts out there. In the same way that we have always taken a granular bottom-up approach for forecasting the Internet of Things, we have done much the same with AI. We have broken the market for AI into a comprehensive set of Use Cases, which range from things like Complex Image Processing and Natural Language Processing through to Risk Analysis and Threat Detection. In total there are 42 Use Cases which we think together represent the opportunity for AI deployed in support of enterprise endeavours (although we omit AI in applications deployed on PCs, tablets, and handsets, other than in the case that those applications are extensions of enterprise processes).

The other major difference is that we don’t forecast revenue. In AI, the dollar value is a really bad way of trying to quantify the market. Is it spend by end users? Spend on licence fees? Spend on services that include AI capabilities? Investment in services? Investment in research? Cost savings stemming from AI? Or a selection of these?

Rather, we have chosen to forecast the Instances of AI, in terms of both the Use Case to which it is being put, and where that Instance is deployed. As an example, we would record an Instance of complex image recognition on an AI-enabled CCTV camera. This gives a much better indication of how much AI is being used and how.

The headline is that AI is set to grow from 1.8 billion instances at the end of 2021 to 21 billion by the end of 2030. The vast majority of this will be accounted for by deployment on Internet of Things devices. The requirement to put increasing amounts of autonomy into IoT devices to speed up decision-making naturally evolves into applying machine learning algorithms. The first generation of IoT was about a connected device controlled by a central process. The coming generation involves autonomous nodes that can act independently, albeit with oversight and management from that central function. The future of AI and IoT are inextricably linked. And, also, it has to be noted that the volumes of AI instances will inevitably be shaped by the number of unique places that the AI needs to live. In the case of an IoT deployment, that will be many. Compare with a chatbot implementation. These are increasingly common but involve maybe only one per enterprise, albeit supporting potentially millions of customers. IoT is a different scale.

Another interesting finding that caught my eye was the geographical variation. Our forecasts are country-by-country for every country in the world. It’s interesting to compare the top territories in terms of how they perform relative to each other. In the chart below we show the top countries, accounting for over 90% of AI instances (and comparing with their share of global GDP). Both the US and (particularly) China very much over-index on AI against even their dominant position in the world economy. South Korea is in a similar position. In contrast India tends to under-index, with an economy that is more labour intensive (rather than capital intensive) this is perhaps inevitable. 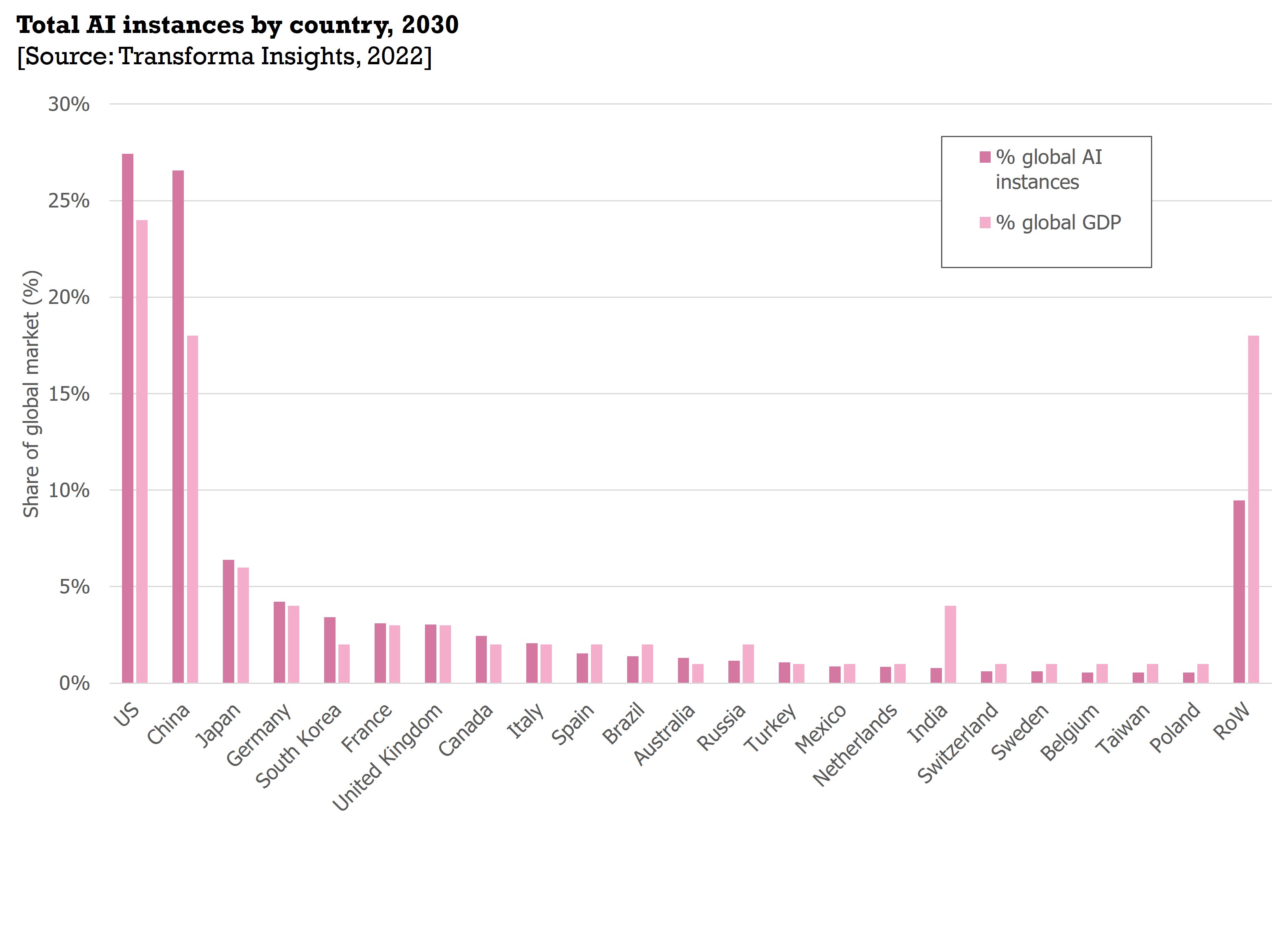 As part of the analysis, to be included in the survey, we also look at which applications are particularly used in which territories. Europe, North America, Japan and Australasia tend to more favour Chatbots and Customer Behaviour Analysis, while regions in Asia and Africa tends to favour Image Processing, Activity Recognition, Threat Detection, and Traffic Monitoring. These illustrate neatly the different requirements that regions might have for where to use AI. Is it to monitor the population, or is it to get people to buy more stuff? Or any of the myriad of other use cases? Join us on the 16th February to find out.