Last week we introduced our new Forecast Highlights page, an excellent resource that showcases regularly updated data and charts from our Connected Things (IoT) forecasts. Freely available to everyone, the page will deliver a live, interactive view of our incredibly granular IoT forecasts at a high level for use in news articles, business plans, pitches and blog posts. All we ask in return is that you credit Transforma Insights whenever you use our data.

Some of the most common IoT forecasts

For the purposes of producing a highlights page we’ve aggregated the data from our IoT forecasts into some of our most commonly used datasets. I should note that the summaries that we’ve made available on the Forecast Highlights page obscure the granularity of the forecasts beneath. Our forecasts are comprised of 230 individual applications, covering everything from aircraft to manhole covers (and all manner of things in between!), divided into 20 industry sectors, modelled in over 190 countries, broken up into nine communication technologies, with a further split into public and private networks. Each of the devices modelled has an associated revenue opportunity and we use these datapoints to build the metrics of our forecast.

Unfortunately, there’s no one rule on how to forecast each individual application, but we need to consider adoption levels, local regulatory environments, national demographics, industrial sector performance, consumer purchasing habits, technology availability and the ever-evolving costs of IoT deployments, along with a multitude of other factors in the context of every application. Whilst we keep all of the most granular data in our forecasts available for clients, we’re demonstrating that same data, and the years of thought and iteration that they represent, at a more aggregated level on our Forecast Highlights page.

Let’s take a look at the available data.

First up we’ve got total IoT connections 2019-2030. Showing the rapid growth of IoT connections over the next decade, this chart will be invaluable for those looking to demonstrate the continued proliferation of IoT devices as well as the continuation of strong albeit declining device growth rates we’re expecting out to 2030. 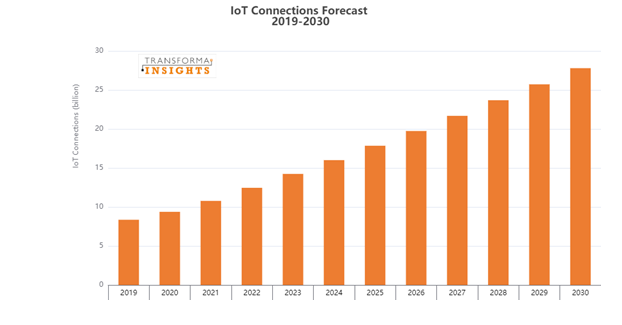 Diving into those 2030 connections figures in a bit more detail, we have a chart breaking down where those connections are being used and whether or not these devices are used by consumers or enterprises, and whether they have a vertical-specific use case. The chart reflects a common finding in many of our applications, that Greater China, Europe and North America are the principal markets for IoT devices throughout the forecast. However there is considerable diversity in how devices are divided by usage within each territory. South Korea has by far the greatest consumer device focus of all regions: consumer devices have a 67% share of total devices at the time of writing. We can see the opposite in India & South Asia and Sub-Saharan Africa, where less than 40% of devices are owned by consumers. 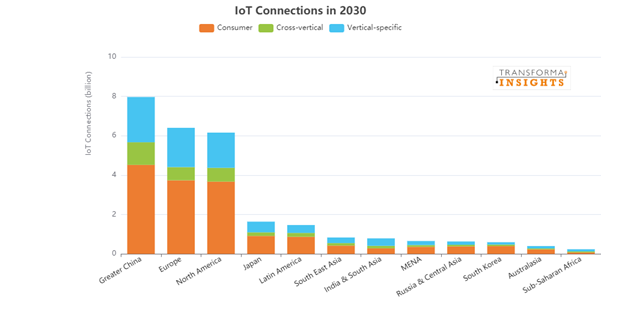 Focussing on just the cellular connections from our forecasts, this chart demonstrates the changing global installed base of cellular devices. It should be noted that for the purposes of this chart multi-mode devices are categorised according to their primary connectivity technology. Those wishing to access data where devices are categorised by communication technology availability will need to access our full Connected Things (IoT) forecasts. The most prominent feature of the chart is the rapid growth of 5G mMTC and to a lesser extent 4G. Much of this growth is a result of 2G and 3G network switch-off, and the declining use of the two technologies during the forecast. Although 2G connections won’t peak until 2022, they will be on a steep decline by 2030. However, by 2030 primarily 3G devices will have ceased to exist, following a rapid decline even in the earliest years of our forecast. Another point to note is that despite the heavy investment in 5G infrastructure, 4G devices will still be considerably more common than 5G non-mMTC in 2030. 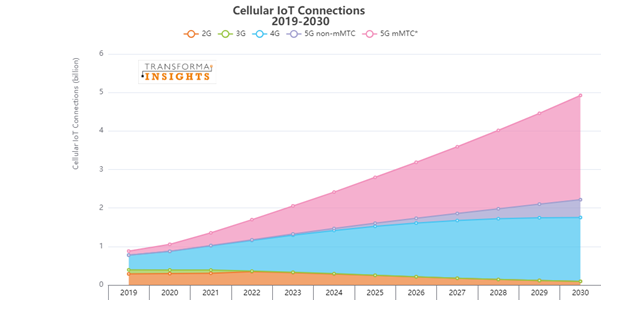 Staying with the cellular theme this chart shows the number of shipped cellular devices on private networks during our forecast period. Again 5G mMTC dominates, although here we can see new 5G non-mMTC devices will be more common than 4G for private networks in 2030 following rapid growth during the latter half of the 2020s. Nonetheless, in an installed base context, 4G devices will still be more common than 5G non-mMTC in 2030. 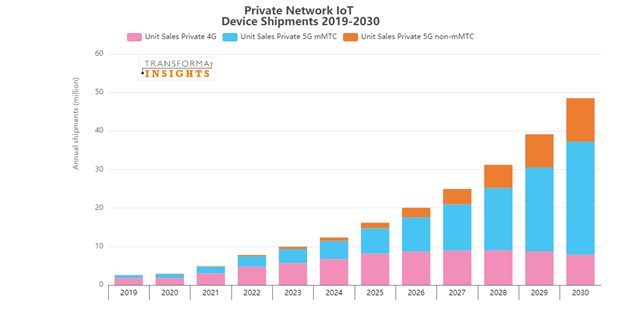 The next chart looks a little closer at LPWA connections and puts into context the scale of the difference between the number of private 5G mMTC and public 5G mMTC devices. Although this is common amongst other cellular technologies, we can see in this chart that private non-mMTC LPWA devices will in fact be more common than their public network alternatives, and considerably more common than private cellular devices. 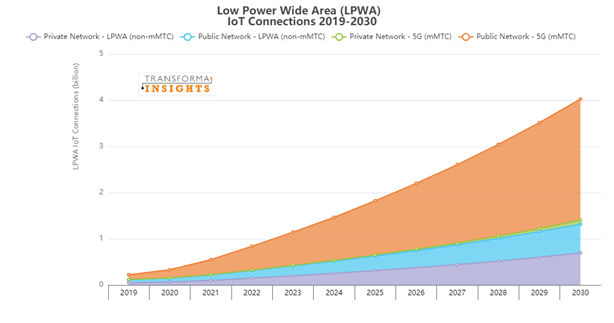 In our final chart, we’re examining the recurring IoT revenue opportunity divided up amongst enterprise verticals. Generic, Cross-vertical devices that are not vertical-specific are excluded from this chart. Government, Retail & Wholesale and Transportation & Storage demonstrate the largest revenue in 2020, although they have relatively small growth rates as a result. Health & Social Care, Agriculture, Forestry & Fishing and Water Supply & Waste Management all represent relatively large industry sectors which we expect to experience considerable growth over the course of the forecast. 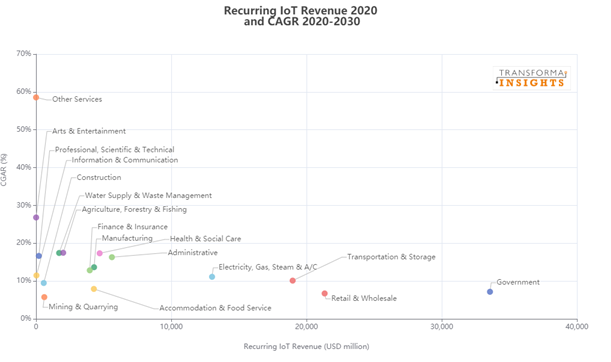 Head over the to Forecast Highlights page yourself to check them out.