The metaverse: an opportunity for enterprises?

Earlier this month, my colleague Nikita Singh led a research report called ‘Metaverse: What does it mean for enterprise?’ which examined the hot (hyped?) topic of the metaverse and the opportunities that there may be in it for enterprises. This blog post provides a summary of some of the key topics.

The metaverse as an emerging area of interest

The last two years have seen significant activities in this emerging area. Facebook changed its name to Meta, and Microsoft and Nvidia partnered with multiple enterprises for metaverse applications. Meanwhile, JP Morgan, Gucci, and Nike purchased a space in Decentraland to sell their products virtually.

The idea of a 3D virtually shared world where all activities can be carried out with the help of augmented and virtual reality services has attracted a lot of attention, supported by the growing maturity of technologies such as Augmented Reality, Virtual Reality, Web 3.0 and Artificial Intelligence technologies supported by high bandwidth and low latency networks.

But what does it mean for most enterprises? How will these new application of technologies and the (as yet fairly ill-defined) use cases provide an opportunity for enterprise?

Dimensions of the metaverse

Our starting point for understanding the potential opportunities for the metaverse was to consider the various overarching scenarios in which it might be used. Clearly this is not easy because the metaverse is a relatively poorly-defined thing. However, there are a number of dimensions that we can consider, related to providing a deep immersive virtual environment in which people and processes can interact. 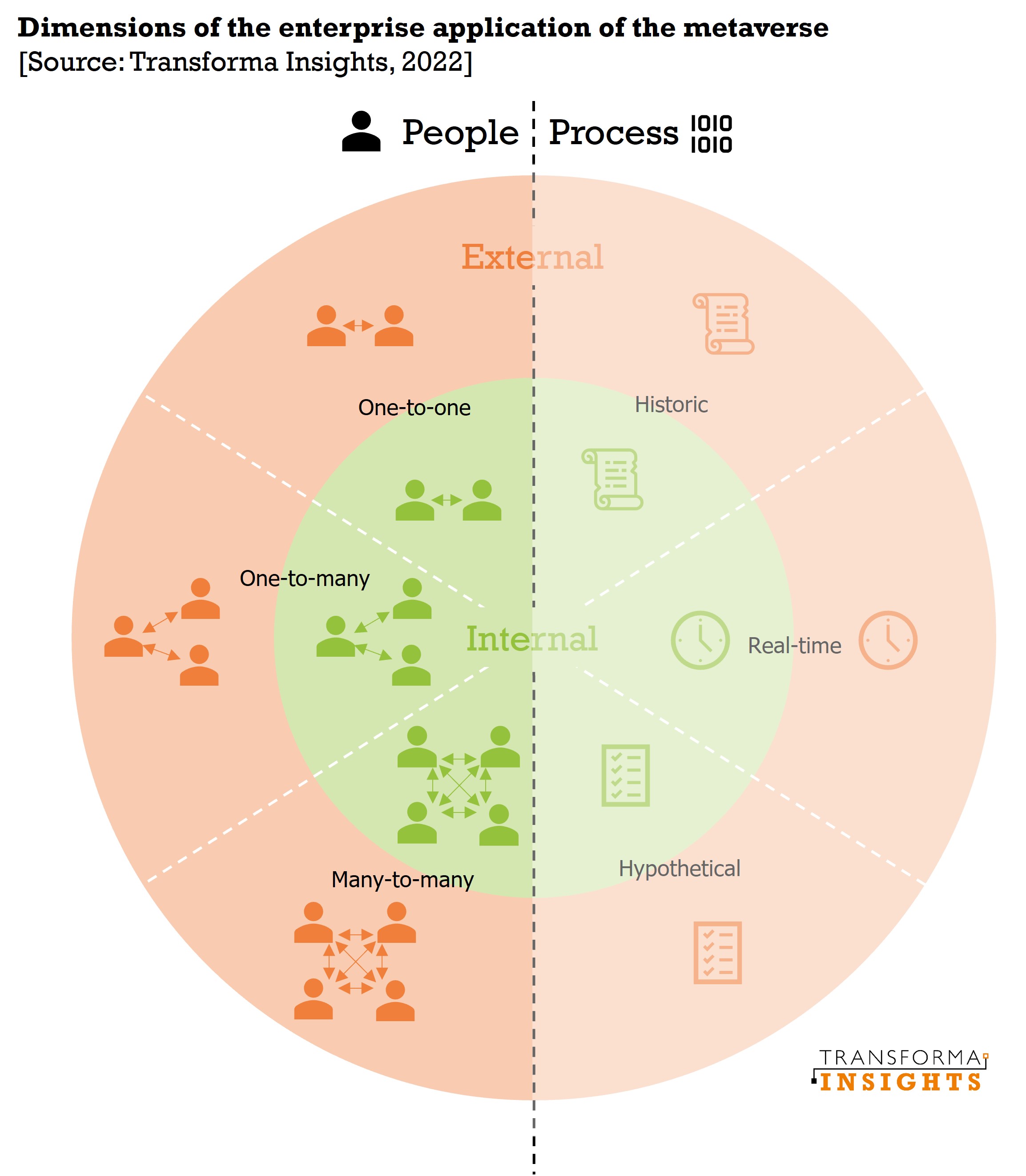 The first dimension is Internal vs External. The metaverse can be envisaged as being used within the four walls of an enterprise for its own internal purposes or externally to interact with customers and other stakeholders. As a simple example, organisations can use the metaverse as a platform for hosting internal meetings, training sessions or communications. In much the same way, they can use it to host external events or for various aspects of sales or customer support.

The second dimension is People vs Process. The metaverse is largely envisaged as a way for people to interact virtually with other people. However, there are also numerous ways in which it can be used to allow people to interact with processes, equipment, products and much more. ‘People’ interactions involve things like customer service, sales, advertising and chat rooms. ‘Process’ interactions involve an individual accessing data and representations of that data.

3. One-to-One vs One-to-Many vs Many-to-Many

The third dimension is a sub-set of the ‘People’ category, relating to whether the interaction is One-to-One vs One-to-Many vs Many-to-Many. This incorporates the likes of customer care interactions, broadcast communications such as training, events or advertising, and chat rooms similar.

4. Real-time vs Historic vs Hypothetical

The fourth dimension relates to the ‘Process’ dimension, there are effectively three forms that interaction with enterprise process data might occur. The first is ‘Real-Time’, whereby the user is able to directly receive and interact with data from the actual live process. This type of interaction is closely associated with what we might term Digital Twin, i.e. a virtual manifestation of the live activity of a piece of hardware or a business process. We have explored the concept of the Digital Twin at length elsewhere, including this blog post: An abundance of Digital Twins.

Finally, there is the question of Degree of Immersion. One of the defining factors of the metaverse is that it involves some degree of immersion in a virtual environment. However, it does not require total immersion. While the most common representation of the metaverse is as a total immersion environment, equating to virtual reality (VR), many of the features can also be delivered as part of an interaction with the real environment, as considered in augmented reality (AR). In AR there is a hybrid of actual reality with virtual augmentation. This might take the form of, as the name suggests, augmentation with further contextual information or enhancement. The reality is that there is a sliding scale of immersion possible within the metaverse as illustrated below.

Where will all this be adopted?

Having identified these dimensions of how the metaverse adoption might be understood, the report then goes on to list for every vertical sector the ways in which we might expect it could be adopted. For instance in manufacturing we might see AR-enabled interfaces for production management, or it might be applied to upstream product design and development, or it might be applied as AR-enabled solutions for field maintenance staff. In total we identify over 50 broad categories of ways it might be adopted and hundreds of different use cases within that. Many are common across lots of sectors such as providing safe spaces for immersive training, or the provision customer support/care. Others are very vertically specific. There are a plethora of ways in which we can envisage the metaverse being used.

Time for a reality check

The metaverse is a nebulous concept meaning many things to many people. Taken at its broadest definition it includes applications that make use of, for instance, AR or some augmentation on Digital Twins. Does this count as the metaverse? That’s a moot point. What matters for enterprises initially is whether immersive and interactive applications might create opportunities for them. We believe that they do.

But, does it need to be part of a metaverse? No, but in order to really gain scale (and we believe enterprise adoption depends to a decent extent on consumer adoption as it did with mobile phones, the internet and much more) it needs widespread adoption with some commonalities and some idea of being something more holistic than just a set of disparate enterprise AR applications (or similar). Consumer demand is, as yet, unproven.