The report examines the current state of Mobile Private Networks/Private Wireless. It looks at the various types of MPNs and alternatives to them, the current status of deployments and likely prognosis, and the all-important question of economics.

Mobile Private Networks, alternatively variously described as Private Wireless or Private Mobile Networks, is one of the hottest topics in telecoms and IoT currently. This report looks at the current status and future prospects for MPNs. The focus is on dedicated standalone cellular-based (i.e. 3GPP technologies) non-public networks (NPNs) used exclusively by one organisation (although with the potential to grant access to third parties) in a specific geographical location. When we refer to MPNs in this report, it is to those types of networks that we refer. For completeness, the report also considers other alternatives to dedicated cellular networks, including the use of the public network for virtual private access, network slices and non-3GPP technologies which are typically deployed as private networks (particularly Wi-Fi, and other mesh networks).

The report starts by examining the various types of MPNs and alternatives to them, including dedicated 4G/LTE, dedicated 5G, dedicated mMTC, non-cellular technologies (e.g. Wi-Fi), network slices and private wide area networks. The second section looks at current status of deployments and likely prognosis. Today there are 1,000-1,500 cellular-based MPN deployments worldwide. We consider some likely evolution scenarios, which see between 10,000 and 40,000 deployed by 2030. The final section considers the all-important question of economics. With typical costs of around USD500,000 per installation, but with variants down to USD100,000 (or even cheaper for very small installations) and up to many tens of millions, how do cellular MPNs stack up against the alternatives and are they worth the premium?

On the 26th September, ahead of the release of the report, Transforma Insights ran a webinar entitled ‘A marriage made on the campus? Developments in 5G and private networks and how they come together’. Many of the themes covered related to the coverage areas of the report. The replay is available for free to subscribers to the Transforma Insights ‘Essential’ subscription. 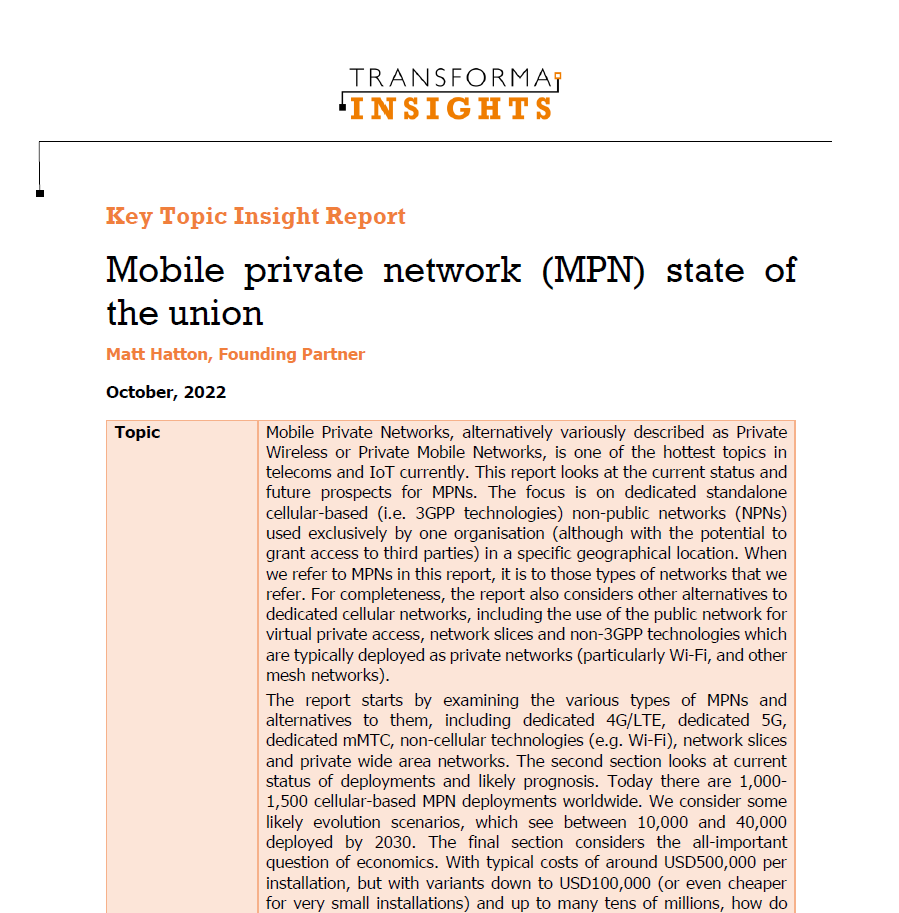