Infographic: Real world lessons in the Internet of Things

On 27th May 2020 Matt and Jim participated in a webinar entitled "Key Characteristics of IoT Projects: What Works, and What Doesn’t?". During that webinar we shared some key findings from our extensive and detailed research on real-world IoT implementations, as contained in the Best Practice & Vendor Selection Database. We also published an infographic with a summary of some of the findings (below). 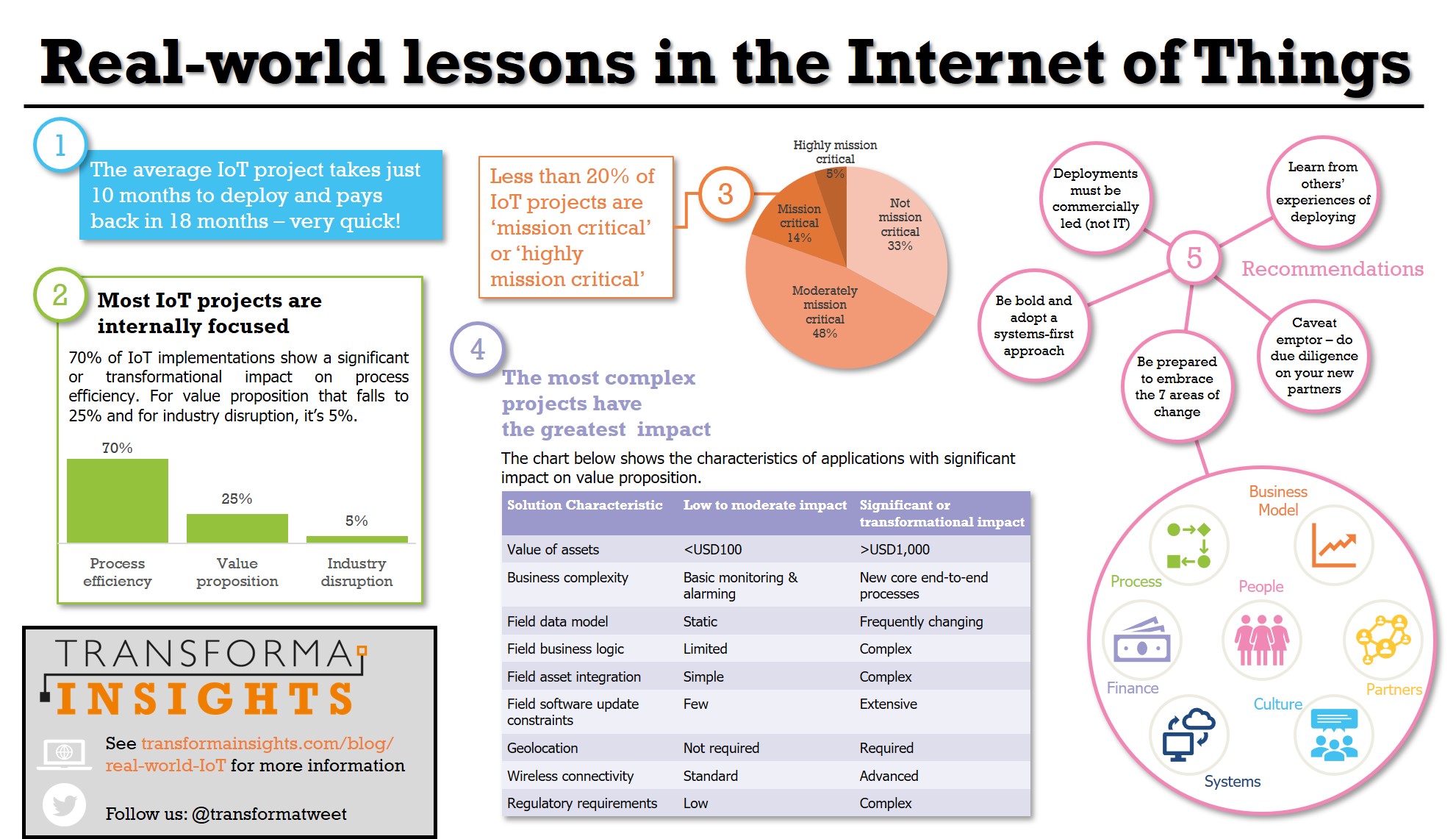 In this blogpost we provide a little more detail on the findings in the infographic, or guidance on where to find more information.

First learning was that the average IoT project takes 10 months to deploy and 18 months to pay back. This is very quick and implies a favouring of relatively simple 'low hanging fruit' applications. This was reinforced by the second finding, which was that a substantial majority of IoT deployments only have a significant impact on internal processes. Much more detail about this can be found in a dedicated blog 'Detailed analysis of IoT deployments reveals significant aversion to risk'

The third finding as highlighted in the infographic was that only 20% of IoT projects are mission critical. Given how sophisticated the technology is, and the potential opportunity, this is a little disappointing. Companies are still not prepared to embrace IoT. A lot of this is probably due to continuing immaturity in the delivery of IoT. We discuss the reasons behind this during the webinar (so we suggest you check out the recording for more details).

To get the most out of IoT, adopters will need to bite the bullet and embrace it. Finding number four shows that IoT applications that are most transformational on externally facing capabilities are notably more complex to implement, across a range of different criteria. The rewards are greater but the complexities are also clearly greater.

Not only that, but the adoption of more transformational IoT will force any adopting company to make changes to how it operates. We identify five main recommendations:

Check out our webinar

We recommend checking out the webinar, which is available here to hear about all the five key findings in the infographic, and much more, including what the characteristics are of IoT applications that are the fastest and slowest to deploy, the requirements for transformational IoT, the key things that don’t work in deploying IoT, and the cross-dependencies between IoT and other digital transformation technologies such as AI, product lifecycle management and distributed ledger.

MAY 26, 2020| Jim Morrish Previous Post
Where does the growth in connected devices come from?
Next Post MAY 29, 2020| Matt Hatton
Huawei Analyst Summit 2020: If all you have is a hammer…
All Blog Posts
Echo Nomad Limited t/a Transforma Insights Address: 7 Albert Road, Reading, RG4 7AN, United Kingdom – Company Number: 12185723
enquiries@transformainsights.com