What was new in IoT at Mobile World Congress?

Tweet
region: ALL sector: ALL Internet of ThingsHyperconnectivityEdge Computing

Other than a comparatively small version last summer, last week was the first Mobile World Congress for 3 years. It’s an invaluable opportunity to discuss all aspects of connectivity relevant to IoT. For me it’s the 16th time I’ve walked the halls and talked to execs, and every time I come back with learnings or a new perspective on things. In this blog post I cover in brief a few of the many topics that were of interest. Specifically, I’ve mostly focused on the IoT angle.

There was a lot of discussion of Mobile Private Network deployments. In particular there was quite a bit of focus on how these are still overwhelmingly LTE (not 5G). While MPN and 5G might have popped up on the radar at around the same time, one is not dependent on the other. It’s not too surprising that the vast majority is still LTE. The use cases for ultra-low latency/ ultra-high bandwidth aren't proven, and there's reticence from the ecosystem (e.g. industrial device manufacturers) to implement a tech still a release or two away from maturity. It was also very interesting to see that there’s still a mismatch in expectations between mobile networks operators and enterprises on what really constitutes an MPN. The former is very keen to push network slices, or even just additional local RAN capacity. The users are much keener to have dedicated on-premises networks.

It also seems like there has been insufficient consideration of how MPN deployments integrate with wide area connections. As with eSIM (see below) it is the IoT MVNOs that seem to be better at working out how to stitch together a heterogeneous network environment. If this is a topic that interests you, I suggest you check out a webinar that we are running on 14th March entitled Beyond the Campus: Why Mobile Private Networks Need a Global Approach.

There is a need for everyone to adopt a 'hyperscale' approach to IoT connectivity. That's what I was talking about at the 5G IoT Summit on the Wednesday. If prices are in decline, and it’s tough to move ‘up the stack’ (it is), then operators are looking for ways to right-size their capabilities to deliver billions of connected devices generating relatively low average revenue per device. We have talked about the concept of $1 IoT in the past, where the prevailing price point for IoT cellular connectivity heads to $1/year. See blog post How will connectivity providers cope with ‘$1 IoT’?.

The way to address this is partly through technology. Using LPWA technologies is one thing, as is integration with hardware, cloud integration, and the use of low-touch connectivity platforms (see below). But at least equally important are business processes, i.e. streamlining processes for instance so it doesn’t take months to onboard a customer, and small sales are handled via online channels.

As you can tell, we have borrowed the ‘hyperscale’ term from the hyperscale cloud providers. What Mobile Network Operators need to do is imitate their approach to the market. If you want to know more, check out our recent blog post ‘Who’s ticking the boxes of being a Hyperscale IoT Connectivity Provider?’

There's a real requirement for a low cost low-touch onboarding IoT connectivity platform capabilities. This is one of the key hyperscale capabilities. But we had so many conversations on this topic I thought it was worth calling it out separately.

The consensus seems to be, both from MNOs and from vendors, that existing platforms may not be capable of stepping up to the mark and alternatives are needed. The likes of 1NCE have given a shove to the idea of needing a much more streamlined connectivity platform to support the low tier, mass market, prepaid, low-data connections, which will constitute the majority of connections. We expect quite prominent moves on this from across the ecosystem in the not-too-distant future.

A need for verticalization (or other specialism) and support services

One of the things about the conversations at MWC is that it’s not always about big announcements or major initiatives. Often it’s about general themes and trends. One that has become increasingly clear to me is that most of IoT will verticalise. Vendors of what are ostensibly horizontal platforms/devices/connectivity/etc. will find themselves specialising through a virtuous circle of winning deals in a sector and building expertise. This may be something they explicitly look to accelerate (see Kore’s moves into healthcare recently), but it's almost inevitable that it will happen.

In a slight variation on the verticalization, I also had a very interesting conversation with one operator that was segmenting not by sector, but by theme (is perhaps the best way to describe it). One example would be sustainability. It cuts across all verticals, but is a specialism. Another variation to watch.

On a similar note, there's still a gap in IoT for a consulting-lite layer which historically was monetised through a premium on hardware or connectivity. Customers thought they were paying for the connectivity or the hardware but really they were at least partly paying for the know-how. With falling prices, this may become more explicit and may increasingly be delivered by specialist vertical-oriented service providers/consultancies. We spoke to a few such companies last week.

There was a lot of discussion of eSIM in an IoT context. In part the question was: why have IoT MVNOs stolen a march on the MNOs when it comes to eSIM. I have written numerous times about how MVNOs have been more able to use eSIM simply by virtue of having more familiarity with working with multiple operators. It’s a commercial issue, not a technology one. That’s not to say, however, that technical issues don’t come up. The industry is still struggling with finding a hybrid of the consumer-style eUICC (SM DP+) and the M2M style. The upshot is continuing uncertainty. What’s for certain, however, is that MVNOs are finding it easier to fit into their portfolios.

It was also noticeable that MNOs were talking a lot about MVNOs. What their strategies are, and how they address the market. And also, interestingly, how they can maybe be a bit more like them, in terms of being more nimble and better at addressing global opportunities. When MVNOs were limited to selling to the long tail, MNOs were happy to have them. When they’re taking a decent chunk of multi-country higher value deployments, that’s a bit more worrying for the MNOs.

There is a growing need for IoT solution elements to be optimised with each other. Module, antenna, network, protocols, and applications all need to work in sync, particularly in constrained (e.g. LPWA) deployments. While all of the various elements may well be interoperable, you can’t just throw any device running any protocol onto any network and expect it to work perfectly. I had many more conversations this year about TCP vs UDP, CoAP vs MQTT (and MQTT-SN), LwM2M and so forth, than I expected to. Frankly it takes me back. We published a report on a similar theme earlier in the year, focused on the ‘Thin IoT stack’. Take a look at the blog post The five ‘P’s that constrain IoT and necessitate the ‘Thin IoT’ stack for more info.

The upshot of this trend is that enterprise customers will increasingly demand an optimised solution, i.e. where all the elements work in sync. The result is that every company trying to sell direct to any customer needs to have a good message about delivering all of the elements in the stack. We expect that more connectivity will be sold with devices in future, and vice versa. We think companies selling just one element will increasingly lose out.

We’re starting to get a bit of interest in data exchanges and what they can do. At the 5G IoT Summit, Nokia’s representative was talking about its Data Marketplace (about which we’ve written a report) and Vodafone launched its Digital Asset Broker which is platform for exchanging and trading data from IoT devices. If this topic is of interest to you, we have published quite a lot of reports on it, including Analysis of leading players in Data Sharing illustrate that this is an early-stage market.

Open RAN is something that has been stimulating a lot of debate in the mobile world for a few years, and it was equally the case in Barcelona (with arguments in some cases getting very fiery indeed). At Transforma Insights we don’t have any particular skin in the game over how network infrastructure is provided, as long as it does the job. We’re interested in the additional functionality that might be delivered through a disaggregation of the hardware from the control layer, but that’s happening in either model. Where Open RAN is interesting, as I shared with the final day analyst panel, is the competitive dynamics it brings. Open RAN is almost the MNOs competing with the traditional infrastructure vendors. The thing is that the MNOs can’t have it both ways. There are numerous instances of them reprimanding those vendors for overstepping the mark in developing IoT connectivity solutions for enterprise. Perhaps the gloves now come off from the infrastructure side. 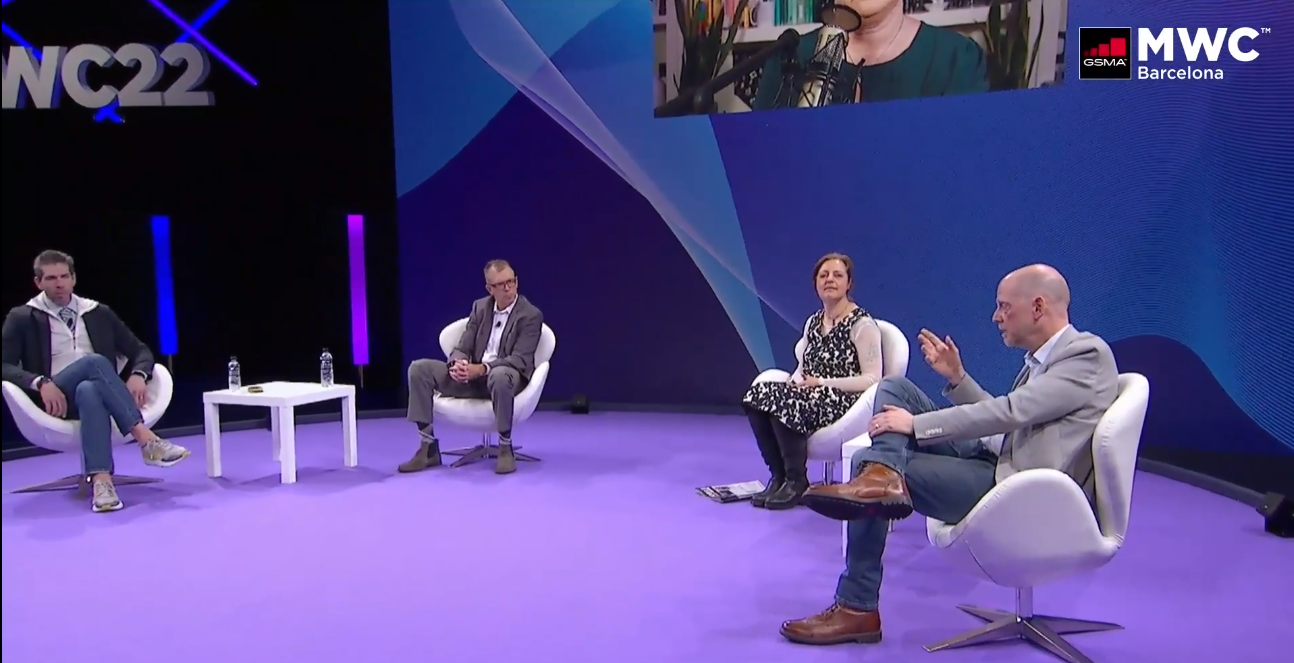 The metaverse (of course)

We can’t leave it without discussing the ‘metaverse’. There were quite a few mentions of this slightly nebulous concept. We will publish our own views on the enterprise applications in a few weeks. In the meantime, one perspective is this: the technology industry is so used to pushing supply-led technologies that when a potential demand-led opportunity presents itself, it doesn’t quite know what to do. The metaverse demands low latency, high bandwidth and ultra-reliability, all of which are critical elements of 5G. The telecoms sector hasn’t quite worked out how this dropped into its lap without it having to lift a finger.

Schedule a briefing with us

If you’re interested in scheduling a briefing with us to discuss these and other key trends from Mobile World Congress, then drop us a line.